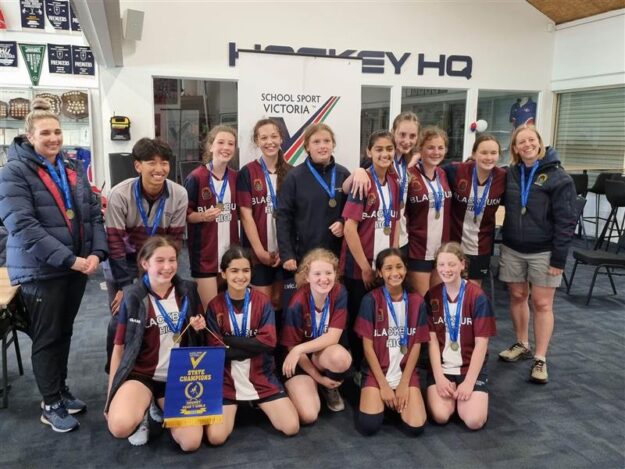 Congratulations to the BHS Year 7 Girls Hockey State Champions for 2023!

On Monday 14th November, the year 7 girls took an early bus to Footscray Hockey Club to play in the State Finals. They progressed through from EMR undefeated and were ready to play their hearts out. They needed to win top of their pool to progress to the Grand Final.
In their first game against Bendigo South East College, Samara scored the first goal in the first 20 seconds of the game! Off to a great start. The girls attacked brilliantly and won 11-0. Samara, Lavinia and Anabel the goal scorers of the game. The second game proved more challenging as the weather was not on our side, the rain pelted down, but our attack was fierce, as we managed 7 corners placing us with great opportunity to score. The girls stood strong against Brighton Secondary College with a 5-1 win. Our third pool match was against Wangaratta SC and again we won 2-0, some gutsy running from Chelsea and Mahsa to bring the ball forward and passing from Saachi and Siya.
The grand final was up against the also undefeated Melbourne Girls College who structured well and had great attack. Lacey in keeper, Jess, Amelia, Bella and Brooke played with their sticks down and stood strong against the attacking pressure of the opposition, only allowing one goal through. A tight game throughout but a goal in the final few minutes led us to a 3-1 victory.
What a phenomenal effort! These girls played so well, improved as the day progressed and remained positive throughout! Thankyou to all the parents who came along on the day to support and to Connor, and Miss Perrin who assisted with coaching throughout the tournament.
Miss Wilkins